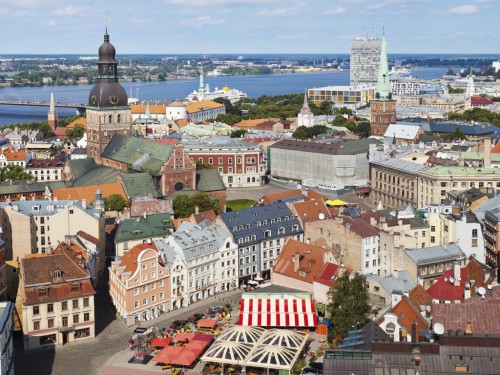 The House of Blackheads dates from the 13th century, the Renaissance period of Riga. The Brotherhood of Blackheads emerged in the 13th century and covenant young, single merchants. The House of Blackheads Was destroyed in World War II, but in a fit of nationalism, after Independence in 1991, the original shape rebuilt.
The house stands a statue of Knight Roland, the legendary hero who stopped the Moors in the Pyrenees in the 9th century. The legend of Roland was immensely popular in Northern Europe and Riga honors him with a statue

The St. Peters Church is the finest example of Gothic architecture in the Baltic States. The construction of the church began around the 12th century and continued into the 15th century. This church was for centuries the inhabitants of Riga devised. The church was rebuilt several times, the many setbacks that the tower has encountered. He was once known as the tallest wooden tower in Europe, but the wood is unfortunately during a recent restoration replaced by metal. The St. Peters church was once the favorite church of Tsar Peter the Great. The tower of the church (79 meters high) is accessible to the public. From here you have a wonderful view over Riga.

The “Three Brothers” ensemble is located in the heart of the Old Town. The houses are built in various medieval Architectural styles and give an excellent picture of the development of Riga through the ages. The oldest “White Brother” dates from the 15th century and seems to fall on the other. The middle is a beautiful renaissance building from the 16th century. The third is a modest Pawn of subsequent date. They are examples of the typical architectural styles which the houses of that time were built. These houses consisted of a large entrance with a chimney kitchen, heated lounge, a few unheated rooms, a cellar and storage space above the living room. Because the upper rooms were used as storage often had the roof hatches and a winch to bring goods to lifts. In these three houses is now the Museum of Architecture housed.

The first castle of the Latvian capital Riga in 1330 as the residence of the Livonian Knights built, long ruled the roost in Riga. Later it served as the seat of the secular powers: Governors from Russia and Sweden. Today Is the Riga Castle as the residence of the Latvian president. Due to its location on the banks of the Daugava River, the castle was a very tactical view of the ship and the port of the city. Now, besides the presidential residence also has 3 museums (Foreign Art, Latvian History and Literature).

The Dom Cathedral is the largest cathedral of the three Baltic states. The Duomo Cathedral was opened in 1211 by Bishop Albert, the founder of Riga. Through the centuries, the cathedral several times destroyed and rebuilt, so here are various styles arise. The first construction period ended in 1270. The original dome was built in the 16th century and up to 150 m high. In the 18th century, the current dome of 90 m high building. The famous organ dates from 1884 and was at that time, with its 6,768 pipes, the largest organ in the world and is still the largest organ in Europe.

Large & Small Guild
These two buildings are 150 years together as two rivals. Riga grew in the 14th and 15th centuries as an important, prosperous trading power. And it shows, to this day, from the stately merchant and guild houses in the city have been preserved. The Great Guild was until 1939 the housing of the rich German population in Riga. There were German traders, merchants and jewelers THEIR home. In 1963, after a fire, the building was rebuilt as a concert hall and it is now the home of the Philharmonic concert in the city.
The Small Guild was housing: bakers, butchers etc.

St. George church was built on the foundations of the chapel of the Castle of Riga for the Sword Order in 1204. After the Reformation victory in the first half of the 16th century, when all Catholic monasteries and churches were destroyed, most of the buildings were another destination. The St. George church was a storeroom. Today it houses the Museum of Decorative and Applied Arts

The Swedish Gate is the youngest and the only port of Riga, which still exists, built in 1698 by the Swedish occupation of Riga. The gate was built in the old city wall. The Swedish Gate tells the love story between a Swedish soldier and a Latvian city girl. The Swedes were used by the Swedish port city in and the couple talked here often sneaking off. Nobody could know, because it never would be accepted. That was also when the relationship became known. The inhabitants of Riga were so outraged that she the girl in the walled port … If you here the night passes, you can come to this place yet softly heard calling: “I love him”!

Monument of Freedom
The center of Riga is the Freedom Monument which towers above the old town. This is a spiritual center of the nation, a symbol of Latvia and its independence. The 50 m high Pillar is surmounted by a female figure (Milda) those three stars in her hand. These refer to the three star Country Parts of Latvia: Kurzeme, Zemgale and Latgale. The 56 sculptures at the foot of the monument, symbolizing the quest for freedom, independence and faith. Since the Latvians no longer burdened by the Russian Empire (in 1991), the monument is guarded by two guards of

The gigantic marketplace in 1930 is the largest and most important market of Latvia, also “The belly of Riga ‘called. This is the most modern and largest marketplace complex in Europe. It is located in five gigantic halls, behind Central Station, which once served as hangars for airships. The gigantic halls are built after the First World War. Here you have a hall for meat, a hall for fresh fish and red caviar (swim even live eels and carp in ponds), fresh fruit and vegetables, dairy products, pickled sauerkraut and other delicacies. The Market of Riga is the ideal place to present life in the city to taste.